Truth and Meaning: The Irony of Narrative


“How can you be a minster and have such hatred in your heart for the white race and the nation in general?"

No, I did not receive this message. This sentence was in one of the thousands of pieces of hate mail Dr. Martin Luther King Jr. received during his lifetime. 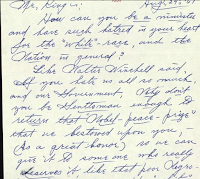 But, I have received similar expressions. People have called me a hundred different derogatory names, belittled my credentials and misrepresented my opinions. If that is the price for taking public positions and seeking to expand the discourse on difficult, even painful issues, then I accept.

The recent growth of the Black Lives Matter movement has given rise to some interesting and ironic arguments. Many Americans take tremendous pride in the manner by which our nation was founded. As oppressed peoples, we rebelled violently against our oppressors, even resorting to nontraditional tactics in that day to kill our enemy. We rebelled against unfair taxation, under-representation, restraint of our livelihoods and the excessive militarization of the government's law enforcement agents.

Does this sound familiar? In the wealthiest nation in the world, we still have aggressively systemic poverty that disproportionately affects people of color. Our criminal justice system detains and convicts African American suspects to a far greater degree than those with light skin. The voting rights of minorities are under constant siege. And hardly a week passes without another brutal and almost completely avoidable execution of a black person by police.

We fund a war machine to the tune of trillions while we cut funding to school lunches and early childhood education. We call welfare recipients freeloaders and leeches while candidates for president brag about declaring bankruptcy and defaulting on their debts to hard working people who performed services for them in good faith. We begrudge people a living minimum wage while corporate CEO pay exceeds the cost of a minivan for one day of work.

If Tamir Rice had been your son playing in Plymouth Park, wouldn't you be angry? If the police pulled you over routinely for "driving while white," wouldn't you be frustrated? If your child got sent to prison for the possession of marijuana while bankers who destroyed our economy received a bailout, wouldn't you feel hopeless?

If so, then you feel a fraction of what most Black people in America feel every day.

The American narrative rightfully evokes a spirit of pride and patriotism. Like hundreds of millions, I love America. But, I have trouble loving America when it resembles 18th century England in its treatment of those it treats as lesser citizens. I cannot meld the theory of American freedom and justice with the current reality faced by our poor, our people of color, our gay and transgender people and other oppressed Americans.

The Founders of our country were religious men and women, people of faith. They had faith that their cause was just and that they had the right to self-determination and fair treatment. Americans today have those same expectations. But the promise of our Founders remains unfulfilled because of racism, homophobia, sexism, ageism, xenophobia and many other forms of intolerance.

I support the #BlackLivesMatter movement because it serves as a wake-up call to those who love America. This movement reminds us of those left behind by the American dream, those still abandoned by our lofty principles. The time is long overdue for us to make good on the promise of the American Revolution to free all of the prisoners, to feed the hungry and house the homeless, and to give hope to those without hope.

Posted by Rev. Jeff Liebmann at 9:58 AM No comments: