If You Can't Say It, Don't Legislate It

So now Ari Adler, spokesperson for Michigan House Speaker Jase Bolger, has this to say about the muzzling of Representative Lisa Brown.  "It has nothing to do with her using the word 'vagina.'  It was judgement at the time that when she finished her statement by referencing her vagina, and then saying 'no means no,' that was drawing a rape reference and he felt that crossed the line."

Then, Adler said Brown was punished because she "threw a temper tantrum on the House floor."  If you support Rep. Bolger and Stamas's censoring of Rep. Lisa Brown, then consider this.  The sure outcome (if not the intent) of this omnibus of bills will be to make obtaining an abortion in Michigan next to impossible.  Now imagine that your 12-year-old daughter is raped and as a result of this traumatic assault becomes pregnant.  If you as her parent think it is in her best interest to get an abortion, and you tell her so, you have just committed a crime.  Whatever your reasoning as her parent, you are guilty of coercing a woman to get an abortion.

By banning accepted telemedicine practices for medical abortions, these bills make obtaining an abortion to victims of rape in rural area much more difficult and expensive, if not impossible.  And, even if the women can obtain an abortion, she now has to treat the remains of this violence against her as a human corpse - she must obtain a death certificate and obtain either burial, cremation or interment.  I cannot even begin to imagine inflicting such agony on a victim of rape.

Even if you consider yourself "pro-life," Rep Brown's comments are completely relevant and important.  HB 5711, 5712 and 5713 punish the victims of rape and incest in cruel and inhumane ways.  And the blatant ignoring of the voices of women in the process of forwarding these bills from the Committee on Health Policy is yet another form of rape - men's abuse of their power in order to take away the voices and freedoms of women. 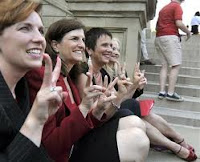 In her speech on the capitol steps last night, playwright Eve Ensler offered a list of things she is "over."  I agree and add my own.
Mr. Adler and Reps. Bolger and Stamas, if you think Lisa's calm and impassioned statement was a temper tantrum, wait until you hear the voices of millions of women and the men who love them at the polls.
Posted by Rev. Jeff Liebmann at 12:56 PM No comments:

I owe so much to my father.  My Dad taught me to think for myself and to stand up for what I believe in.  My Dad showed me how to work hard, serve the community, and respect others.  He listened when I needed to rant, and advised when I wanted help.  He may not have been a perfect human being (who is?) but he was a perfect father.

Most of all, my father was the one person in my life I wanted most to honor.  When I look at what I have accomplished and the work I am doing and have yet to do, I know that he would be proud.  He would be looking at me with that small grin, and wordlessly approving of the man I have become.

My greatest hope in life is that my son will be a man who sees me that same way and will become that kind of father to his children; that my daughter will be a powerful and fearless woman; that my grandchildren will to learn to respect everyone, to love everyone, and to care about everyone over money, power, and status; and that through my life and deeds, I help strong and loving fatherhood endure.
Posted by Rev. Jeff Liebmann at 11:05 AM No comments: