So, another Valentine's Day is upon us. My message today is simple. You are loved. 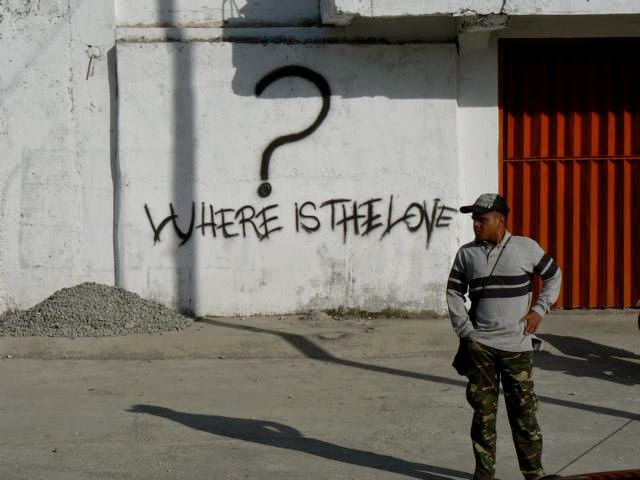 I know this because I love you. As a Unitarian Universalist, I affirm and promote the inherent worth and dignity of every person, and compassion in human relations. Because I love you, I fight for your civil rights and for your freedom from discrimination. Because I love all of you, I advocate for a living wage, better public school funding, and clean air and water. Because I love every person, I dedicate my life to being my brother's and my sister's keeper, to justice for all, and for an end to violence and war.

Despite the awful tragedies happening every day, the world is a pretty terrific place. In spite of our failures and heartaches, there is much to be said for living. But our lives are only as good as we make them, and we can all try harder to help those who are less fortunate to have a voice and a vote about things that affect them.

The best way to do this is to express your unconditional love proudly and publicly, without any expectation of any benefit in return. Love without judgment. Love with no strings attached. Love simply for the sake of loving.

Do I believe human nature causes us to be hurtful, distrustful and prejudiced? Not for a second. Am I a doe-eyed, naive Utopian? You bet. Love will do that for you. Love helps you see the innocent child in every person before life teaches them to be afraid and angry.

I am blessed to be married to a woman who reminds me every day of the power of love. And I am fortunate to be part of a religious community whose cornerstone is human beings caring for each other and welcoming all spiritual seekers regardless of their identities. May you feel that power within you on this Valentine's Day, and every other day of the year.
Posted by Rev. Jeff Liebmann at 8:25 AM No comments:

Truth and Meaning: Are You Economically Free?


According to the Heritage Foundation, economic freedom is “the fundamental right of every human to control his or her own labor and property.” In an economically free society, they argue, “individuals are free to work, produce, consume and invest in any way they please” and “governments allow labor, capital, and goods to move freely.” As you read this column, you might imagine that they are talking about you. You might logically think that they are concerned with your well being.

But are you truly free economically? If you lost your job tomorrow, how long would it take you to find a comparable job? Do you make enough money to plan for the future meaningfully? Are you really free to produce and consume as you please, or are you having trouble just keeping up with credit card payments, rising consumer costs, house and car repairs, medical bills, student loans and countless other expenses?

The problem is not with your understanding of work and money, but rather the hypocrisy of proponents of this skewed view of economics. Because, in reality, the Heritage Foundation could not care less about you, your home, your children or your future. All they care about are the handful of multi-millionaires who can invest more in one transaction than you will earn in a lifetime without any concern about losing it all. To the Heritage Foundation, you are not a person, you are a unit of labor, a commodity to be purchased, used and discarded.

Last Sunday, Northwood’s Timothy Nash explained in this editorial how America’s economy will suffer if we do not pass more pro-business tax reform and make it easier for the wealthy to trickle down their riches unimpeded. He based his recommendation on his concern that the ranking of the United States in the Heritage Foundation’s Index of Economic Freedom dropped from 6th to 12th place in the past five years. Let’s examine this hypothesis.

Nash’s use of this index provides a classic example of misusing statistics to make a dramatic point. First, the Index of Economic Freedom ranks nearly 200 countries, so a drop in rankings from 6 to 12 perhaps should not unduly concern us. But, who surpassed us in those rankings? Ireland, Canada, Chile, Denmark, Estonia and Mauritius. Do you even know where Mauritius is?

To benchmark the American economy against world peers, wouldn’t you limit the comparison to countries with a comparable economy? In 2013, there were only 15 countries in the world with Gross Domestic Products in excess of $1 trillion. Only two of the 14 countries other than the U.S. rank higher in the Index of Economic Freedom — Canada and Australia. Among the lowest ranking peer countries are Brazil (118th), India (128th), China (139th) and Russia (143rd). Other peers include Japan, Germany, France, England, Italy, Spain, South Korea and Mexico. Perhaps before we predict doom and gloom for the American economy, we should first benchmark ourselves only against appropriate peers. 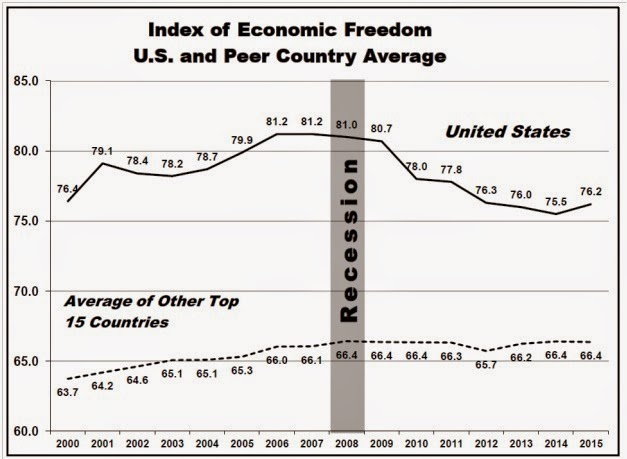 Second, the Index of Economic Freedom includes an impressive array of data elements, all of which have some relevance to examining global economies. However, a longitudinal analysis of a manufactured index such as this must also take account of external events that might skew the numbers radically. This chart shows the Index of Economic Freedom for the United States as well as the average of the other 14 countries with GDP’s in excess of $1 trillion. Note that the U.S. consistently scores significantly higher than our peer group. Also, notice that the index for the U.S. was increasing noticeably until 2008 — the year of the biggest recession to hit this country since 1929. As one should expect, that colossal calamity of criminal fraud and greed took its toll on our ranking — a toll from which we are only now beginning to recover. Lastly, note that the index for the U.S. is now almost exactly at the same level as 15 years ago.

A key problem when using statistics is picking and choosing the numbers that support your assertion and then overemphasizing their importance. In this case, to cry wolf over a drop in economic ranking caused largely by the malfeasance of bankers, venture capitalists and high risk investors is unwarranted especially when we still outrank most of our true peers. And to recommend that America reward the very institutions that facilitated our financial collapse is utterly uncalled for.


So, I challenge economists to craft a real Index of Economic Freedom. Included in such an index might be percentages of:
We don’t need to give Wall Street and the ultra-wealthy more freedom to wreak havoc on our economy. We need to give secretaries and teachers, managers and technicians, restaurant workers and occupational therapists more true economic freedom. We need to give women and minorities, and workers in our depressed cities more economic freedom. And we need to give our children the hope of economic freedom to attend college without crippling debt, to raise families without sacrificing leisure time and to plan for retirement secure in the belief that those funds will not disappear into an off-shore bank account.
Reject the statistical machinations of the Heritage Foundation and call for an American economy that truly cares about all human beings. Advocate for workplaces where workers are free to organize for their mutual benefit, and a marketplace free from gouging fees and interest rates. Tell our economists that every human person should be compensated fairly based on their labor, not on accidents of their birth and the privilege derived from inherited wealth or physical attributes. And remind our pundits, as people of faith, that human beings matter more than money, and that true freedom is measured by the way a society treats its most unfortunate, not its wealthiest.
With nearly one-quarter of the world’s GDP, no one should be jobless, homeless or hopeless in the United States. Parents should not have to worry about whether to pay the gas bill or feed their children. No one should have to worry about being fired because they are gay or transgender. Everyone should be paid fairly regardless of their gender. And no one working a 40-hour work week should be living in poverty. A fair and just society is not about wealth. Feed the hungry, quench the thirst of the parched, welcome the stranger, clothe the naked, care for the sick and visit the prisoner. When we do these things, we will have all the freedom we need.
Posted by Rev. Jeff Liebmann at 12:43 AM No comments: