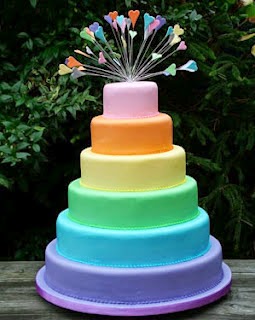 Much ado has been made in the past year about the bakery in Colorado that refused to make a cake for a same-sex couple celebrating their marriage. The baker argued that he exercised his religious freedom in refusing to bake a cake celebrating an act he considered counter to his religious beliefs. This argument makes a mockery of our Constitutional rights by hiding bigotry behind the right to religious freedom.

Here are the salient points:

As a minister, I wholeheartedly support the free practice of religion and I absolutely defend your freedom to believe the religion of your choice. What I find reprehensible, however, is when people use their religion as a shield for groundless hatred and bigotry. If you choose to discriminate against same-sex couples because you oppose homosexuality based on your interpretation of your religion's teachings, then you must apply those same standards to all customers. Are you going to give every customer a survey asking if they are guilty of any of a list of sins you find objectionable? If not, then you are a hypocrite abusing an important freedom that is seminal to the founding principles of this nation.
As the Michigan legislature considers adding "sexual orientation and gender identity and expression" to the Elliot-Larsen Act's list of protected classes of people, I call on everyone to make clear to our senators and representatives that we cannot allow people to pick and choose which religious beliefs they want to protect. Whatever your personal beliefs about homosexuality, the state has an overriding obligation to protect the basic civil rights of LGBT people.
Posted by Rev. Jeff Liebmann at 8:10 AM No comments: