On this holiday weekend, I am reminded of everything we have to be thankful for as a result of our institutions of organized labor. Workplace safety regulations, fair wages, fringe benefits, standardized hours and work weeks … the list goes on. Having recently returned from the 50th anniversary of the March on Washington, I was reminded of the words of Walter Reuther, president of the United Automobile Workers of America and vice president of the AFL-CIO, who spoke before Martin Luther King Jr. on that day in 1963. Sadly, I was reminded of the truth of his words ringing in today’s America, where politicians hold our citizens hostage in order to coddle special interests and radical fringes.

“There are too many high octane, hypocrisy Americans. There is a lot of local talk about brotherhood, and then some Americans drop the brother and keep the hood … this rally today should be the first step in a total effort to mobilize the moral conscience of America, and to ask the people in Congress of both parties to rise above the partisan differences …”

"If we can have full employment, and full production for the negative ends of war, then why can't we have a job for every American in the pursuit of peace?”

“Men of good will must join together, men of all races, and creed, and color, and political persuasion, and motivated by the spirit of human brotherhood. We must search for answers in the light of reason through rational and responsible actions. Because if we fail, the vacuum of our failure will be filled by the apostles of hatred, who will search in the dark of night, and reason will yield to riots, and brotherhood will yield to bitterness, and bloodshed, and we will tear asunder the fabric of American democracy.”

So, this Labor Day, as we watch the parades and picnic around barbecues, let us also remember the greatness of the labor union movement — a movement dedicated not only to a better workplace, but to a better society … a better America.
Posted by Rev. Jeff Liebmann at 5:33 PM No comments:

Mr. Chris Stevens, the religious person in me wants to forgive your shallow and heartless diatribe on Sunday, August 25 as merely misguided and ill-informed. But, the realist in me hears the voice of the bigot, the snap of the overseers’ whip and the angry shout of whites claiming righteous indignation when the target of their oppression dares to advocate for equality. Your editorial exhibits a shocking and remarkable vacancy of knowledge of the black experience in this country and in American history.

How dare you, the beneficiary of much privilege in this country, equate any paltry response in retaliation for the Zimmerman travesty with the countless examples of white racism perpetrated over centuries. You are obviously an educated man, but apparently have not availed yourself of African American history courses or any of the many informative books detailing the unique actions of white racism in this country. Sadly, the fact that you use your position to spew such malicious trash on readers in this community displays an unwillingness to learn about our history of racial cleansings, pernicious economic and social violence against blacks and ongoing systemic efforts to impoverish and dehumanize people of color and the poor. Recent efforts installing dictatorial emergency managers have targeted mostly black communities, and state governments passing voting rights restrictions to resolve non-existent fraud but clearly aimed at poor people and students, are just two examples of current deliberate attempts to disenfranchise blacks from the American dream that you so easily take for granted.

The common ground you call for starts with you, and all whites, educating themselves about the black experience in the United States. The common ground you seek starts when you learn about our history of violence against blacks, our history of legal repression of blacks and our ongoing social and economic assault on blacks in this country. The common ground you call for starts when you accept your complicity in accepting the largess of white racism through the accident of your birth and recognize the vastly unlevel playing field we live on. Until you accomplish this, you have absolutely no standing in this conversation.

As we mark the 50th anniversary of the March on Washington, all people of good will and believers in social equality remember the words of Martin Luther King, Jr. and his commitment to nonviolence. But, violence is not just about hitting someone with a fist. Violence is also persistently paying people low wages, restricting access to affordable health care, underfunding public schools, providing little of no access to avenues of social mobility readily available to others and supporting a separate and not-equal justice system. If you want to trot out your handful of examples of violence, then you must be prepared to answer for the wave after tsunami wave of violence perpetrated on blacks in this country by whites for the past three centuries. Once you are prepared to undertake that work, then and only then, will you understand that you have no claim to victimization. Then and only then will your heart be tempered with the humility and compassion needed to serve, honor and respect the true victims of racism.
Posted by Rev. Jeff Liebmann at 10:15 AM No comments: 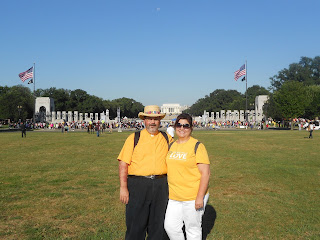 As you read this post, Jody and I will have just returned from Washington, D.C., after taking part in the 50th anniversary of the March on Washington. The memory of that event and the leaders who spawned it humbles me as the impact of their greatness lingers on today. Sadly, also lingering on today is the root cause of so much injustice in our nation – racism – and the privilege that racism engenders.

To understand this issue, you must understand this basic fact – the concept of “race” is a lie. The notion that homo sapiens is somehow divided into subspecies based on skin color and other physical attributes has no foundation in fact. Race is a fabrication of 19th century Europeans and Americans who presupposed that “white” culture is superior to other cultures and that all people must be converted to the “superior” religion of Christianity. And out of this flawed thinking derived theories of eugenics, which ultimately were responsible for multiple genocides in the past century.

So I march as an ally for those who cannot march; I speak when the oppressed have no voice; and I help open doors that are closed to those without our society’s privileges. For, like the Rev. Dr. Martin Luther King, Jr., I have a dream of a society where all of our boys and girls, gay or straight, will be judged by the content of their character and not the color of their skin. I have a dream that all people, however they appear, whatever the gender of their identity, or whoever they love, will have the same access to housing, to jobs, to health care and to civil rights. Like Jefferson, I believe that we are all created as equals and that we are all endowed with the inherent right to life, liberty and the pursuit of happiness.
Posted by Rev. Jeff Liebmann at 7:10 PM No comments: