Truth and Meaning: Notoriety or Notorious?

When called to serve the Unitarian Universalist Fellowship of Midland, I was pleased to be moving to the City of Modern Explorers. I envisioned living someplace known for innovation, forward thinking and progress. People I spoke with talked proudly of Midland's notoriety as a wonderful place to raise a family, a small city filled with the amenities of a larger metropolitan area.

Lately, however, Midland's notoriety has become overshadowed. We continue to make national, even international news — but not for new inventions, or for cultural achievements. No, Midland has instead become notorious as a bastion of fundamentalist theocracy, intolerance and bigotry. And the latest addition to this sad list...hypocrisy. 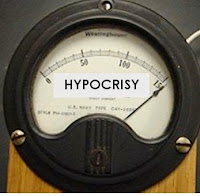 The obsession of homophobic and transphobic public figures in our city is not simply disturbing, but a national embarrassment. And the recent revelation of a local minister decrying homosexuals while engaging in sexual discussions with men on a gay dating website colors the credibility of our community.

Beyond this announcement, the subsequent resignation of the clergy in question, and the unimaginable horror in the future for this family, lies another even more insidious evil that remains unaddressed. How many people have read his words, listened to his speech and felt confused and conflicted, and perhaps filled with self-hatred? How many families has this man "counseled" into dysfunction and broken relationships? How many gay teens have sunk into depression, even attempted suicide because their minister told them that they were sinful?

I feel for his wife and children. I can even find a small measure of sympathy for him. But I reserve most of my concern for the victims of his vitriolic attacks on gay and transgender people. I stand with gays and lesbians, bisexual, transgender, and queer folk and offer my support as they face routine discrimination and public shaming by public officials who lack the will to love their neighbors as themselves.

If you are gay and a minister has told you that you are an abomination, then find another minister. If you are a lesbian and have been shamed by your church as sinful, then seek out a welcoming congregation. If you are transgender and been told that your religion has no room for you, then look for a religion that embraces you. And if you are questioning and hear our representative in Lansing compare you to a pedophile, then join with us.

Midland, we should be sick and tired of being notorious for our intolerance of people because of their sexual orientation or gender identity. The time has come to enhance our notoriety once more. The time is now to add sexual orientation and gender identity to the class of people protected from discrimination in our city. And from now on, our religious and political leaders should know that hate speech is not free speech, and that ancient scriptures do not replace truths proven by verifiable research.

Posted by Rev. Jeff Liebmann at 9:22 AM No comments:

Truth and Meaning: Our Twilight Zone

I grew up watching The Twilight Zone, The Outer Limits and the original Star Trek television series. Alternative universe stories fascinated me. Contemplating different realities helps me appreciate the challenges we face in this life, at this time.

So, I invite you to the dimension of imagination, to experience the awe and mystery of a strange new world. Imagine a frontier Mid-Michigan just after the Civil War. Timber drives the local economy, but this resource will soon run low. Along comes a free Negro named Dow who invests everything he has in a dream. And his dream pays off.

Dow builds what will eventually become a major international corporation … in Saginaw. The nearest port, Bay City, thrives. And the village of Midland struggles to make lumber stretch as long as possible.

Former slaves stream to Saginaw by the thousands, building a thriving metropolis. When the Depression hits, Saginaw and Bay City ride the storm. Midland, however, loses many of its struggling businesses, and only the poor remain to hold the pieces together.

Through the 1950s and 1960s, Saginaw blossoms. The city builds riverfront condos, major retailers grow downtown, and a stadium attracts a AAA baseball team. Locally-owned businesses flourish as the average income rises. Saginaw becomes the first American city to adopt full civil rights for all citizens and a guaranteed minimum wage higher than any other in the nation. Property values soar, public schools prosper, unemployment disappears and crime remains low.

Midland, on the other hand, struggles to keep schools going. The mostly white residents rent dilapidated houses and apartments and cannot find full-time jobs that pay more than subsistence wages. Drugs and violence are rampant among the vacant lots, and the mostly black police cannot keep pace with crime. After years of annual deficits and cuts to public services, the state installs an emergency manager, and the elected officials lose their authority. Residents of Saginaw driving to their summer cabins avoid Midland whenever possible. They wonder why the residents of Midland cannot do what it takes to clean up their city and get off the public welfare rolls.

One day, a white boy plays in the pavilion of Plymouth Park with a toy gun. He is alone with little to do because there are no playgrounds, no after school programs, and his family cannot afford clothes and food, let alone game systems, computers or cable television. A fearful neighbor calls 911 and two black police officers arrive on the scene. The younger officer — previously rejected by the better police force in Saginaw — jumps from the car shooting. In seconds, the boy lies dead on the ground.

In the ensuing days, the white residents of Midland explode in anger. They feel the weight of decades of economic injustice, feelings of shame and guilt because their kids lack the opportunities available to those in Saginaw, and outrage at the brutal murder of a child. They take to the streets, rioting against the hopelessness of this unfair system. They march down Main Street past the vacant store fronts and bars. Occasionally, someone throws a rock and one liquor store burns. Across the country, the news shows white Midlanders running and looting, and reports that the boy’s shooting was justified.

Pat Robertson leads a largely-ignored march in Washington, D.C., with the families of the slain boy, and of other white men gunned down by black police officers across the country. But the media call him an opportunist. The lone white commentator on Fox News opines about how welfare keeps the white people unmotivated and poor. A black sports writer in Saginaw pens an editorial calling on all people to simply engage in hard work; commitment and perseverance; effort, energy and sacrifice; respect for others; serving others; helping others. And a black Unitarian Universalist minister in Saginaw responds, calling the sports writer’s piece racist and an example of privilege.
Is this scenario difficult to imagine? Perhaps. This alternative reality might be especially difficult to imagine if you were born privileged and cannot dream of such patent unfairness. If you were born white, understanding institutionalized racism is challenging. If you were born male, the economic impossibilities facing poor, single mothers are unfathomable. If you were born financially comfortable, you think that anyone who works hard enough can accomplish whatever they want in life. And if you were born straight, you might simply assume that heterosexuality is the norm for all people and disapprove of the gay “lifestyle.”

Open your eyes. Nothing is as simple as the pundits want you to believe. Our problems do not derive from poor people believing they are entitled. Our problems derive from privileged people — people who did nothing to earn their privilege but be born that way — doing everything possible to skew social systems and maintain their own sense of entitlement.

At the end of the episode titled “The Monsters are Due on Maple Street,” Rod Serling stated: “The tools of conquest do not necessarily come with bombs, and explosions, and fallout. There are weapons that are simply thoughts, ideas, prejudices. For the record, prejudices can kill and suspicion can destroy. A thoughtless, frightened search for a scapegoat has a fallout all its own for the children and the children yet unborn. And the pity of it is, these things cannot be confined to the Twilight Zone.”

In this reality, Black Lives Matter.

Posted by Rev. Jeff Liebmann at 9:49 AM No comments: