Drilling to Our Spiritual Core

We Unitarian Universalists pride ourselves on our commitment to social justice.  We hold in deep reverence past acts of abolitionists, suffragettes, civil rights activists, and others promoting equality, freedom and democracy.

A new movement has emerged that does not ask, "Can you imagine yourself a slave?"  "Can you feel how it feels to be a woman?"  "Can you understand the experience of being African American; Indigenous; Gay, Lesbian, Bisexual, Transgender, Queer or Intersex?"  This new movement has turned the question around and asks, "Do you recognize that we are the 99%...that you are the 99%?"

Perhaps you are reading this on your home computer, or your smart phone, thinking that things are not that bad.  Maybe you are very happy with your life and you cannot understand why these protesters just don't work harder to find a job, or suck it up and pay their student loans like everyone else.  You see media reports of dirty-looking 60's leftovers whining about everything without any suggestions for real change.  You ask yourself, "Why don't they run for office if they are so dissatisfied?"  Or, "If they hate America so much, why don't they go somewhere else?"

All legitimate questions.  Consider one answer.

Are these problems now magically solved?  Of course not.  Millions of undocumented immigrants, who have come to America just like our ancestors did, suffer in indentured bondage under crushing bureaucracy, hunted by an indifferent and overzealous paramilitary army with little or no oversight.  Women remain objectified in virtually every medium as objects for the sexual pleasure of men, their paths to leadership stifled by images created by corporations whose only bottom line is profit.  And GLBTQI people still suffer thousands of discriminating laws, the rejection of the most basic human right of marriage, not to mention all too frequent violence and even murder simply because of their identities.

And now we have Occupy Wall Street - a bunch of poor, dirty hippies grousing about rich  people, if you believe the mainstream media.  But, is that the reality?

The reality is that the United States in the past 50 years has made conscious decisions - moral decisions - to place profit over people.  Industry regulations have been eviscerated in the name of promoting economic development.  At the same time, we have carved away iindividual liberties in the name of security.  With the stroke of a pen, the highest court in the land has declared that a corporation is a person.  Racial minorities, women, gays and lesbians, and immigrants have been fighting for that recognition for 200 years and have yet to achieve their goal.

And what is our reward?  The free press, with the possible exception of a few small outlets, is essentially dead - held in a corporate vice grip by a literal handful of wealthy individuals intent on maintaining their Divine Right.  Ten of millions of Americans still suffer from untreated illness and disease because we have invested in bailouts instead of universal healtcare.  Washington continues to insist on fighting unjust and illegal wars across the globe, and looks to our social safety nets of Social Security, Medicare, Medicaid and others to foot the bill.  Our corporations rape our environment unabated, shelter billions in earnings from fair taxation, gamble with the economic life of our nation through unscrupulous speculation, and then are handed over the keys to the treasury to cover their losses - money that should be educating our children, creating jobs, caring for our elders, and giving young people reasons to hope that their belief in hard work and the American Dream is not just playing them for suckers so CEO's can get another million dollar bonus.

Religious people of every faith should be outraged, because every text we hold sacred preaches against these moral choices.  Here are just a small portion of the wisdom taught in every religion
The Occupy Wall Street movement has, at its core, a moral imperative.  As a society, we make choices about resource allocations, about what matters to us as people.  In recent years, we have chosen to support corporate idols over the needs of people.  But, corporations do not have souls, the moral capacity to act ethically, to sacrifice, to love.  OWS reminds all religious people, it reminds all of us, that the decisions are ours to make.

I don't know the direction OWS will take.  But, as Theodore Parker said in "Of Justice and the Conscience" (1853): "I do not pretend to understand the moral universe; the arc is a long one, my eye reaches but little ways; I cannot calculate the curve and complete the figure by the experience of sight; I can divine it by conscience.  And from what I see I am sure it bends towards justice."
Posted by Rev. Jeff Liebmann at 12:22 PM 3 comments:

Funeral for the Death of the Middle Class 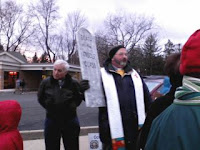 At our Occupy Midland demonstration today, we had a funeral for the victims of corrupt politics and failed economics. Here is the text of the eulogy.
=====
Dear Friends,
Welcome to this solemn occasion, and join together in loving community as we lay to rest our dear brothers and sisters. We assemble today, people of all ages and races, men and women of all backgrounds and identities, spirits of all faiths, united in common cause against insidious invaders intent on destroying the America of our founders.
But, let us not grieve so deeply that we fall into a melancholy of inaction. For new children stand ready to take the place of these, our dearly departed. The 99% does not seek two-car garages, but equality and fairness. The 99% pursues not personal glory and isolation, but revels in teamwork and action with our neighbors. The 99% opens their arms to all willing to work side-by-side in peace and nonviolence, leaving no one behind. The 99% warmly hugs every tree, bush, and stone of our Mother Earth, knowing that living in partnership with our environment benefits all.
The forces opposing us are wealthy and determined. But, in the end, they fight only for the illusion of money. For power is only ours to keep or to give away. Let us leave this sad occasion with a new resolve to retain the power of self-determination, of mutual concern, and of fairness and love.
Let it be so. Amen. Shalom. Salaam Aleikum. Om. Blessed Be. Namaste.
Posted by Rev. Jeff Liebmann at 11:21 PM No comments: